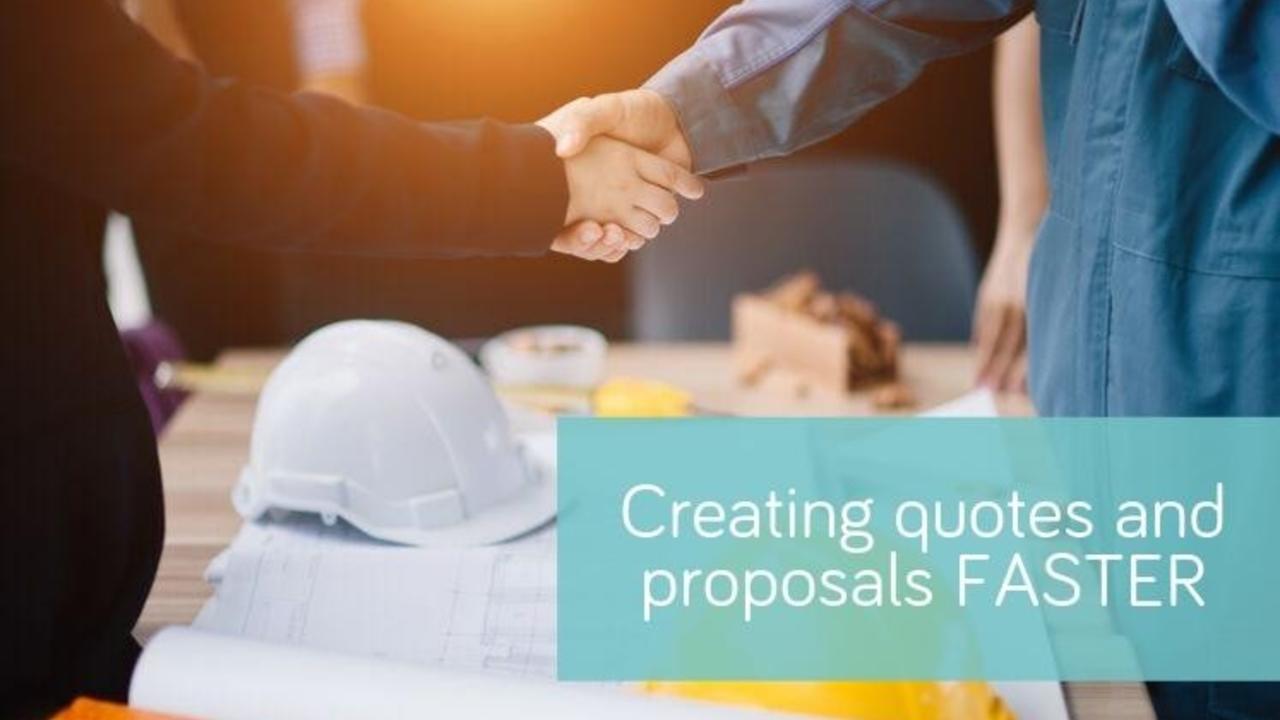 When a prospective client asks you for a quote, it's obviously a great opportunity to make a sale or secure a new project.

But if you take your time to respond, provide wildly different quotes for similar work, or otherwise send bad signals about your business, you could easily miss out on that client.

The good news is that technology can now help you respond to prospective clients quickly and consistently, and show them how capable and competent your business is.

Software packages are now available that can automatically generate quotes and proposals. They even include templates you can quickly edit instead of having to write the entire document from scratch—great for proposals that vary widely from client to client.

But while these software packages are becoming more and more sophisticated, they can only send a quote or proposal to someone who asks for one. And people won’t ask unless they recognise the value in your service.

Quotes or Proposals — Which best suits your business?

While automation is one way to streamline your business processes, it might be worth considering whether quotes or proposals are really working for you and serving a useful function in your business.

A quote is usually just a list of products or services, their quantities and the total price. But a proposal also:

Quotes are the standard for most industries because they’re quicker and easier to produce. And for those selling goods predominantly in retail (physical and digital), a quote is probably all a client needs. Chances are they’ll just be comparing your price to that of your competitor, and whoever has the lowest one wins the sale.

But in an industry such as ours, you often need to communicate how you’ll help a potential client, and why you’ll be of value to them. As explained earlier, you need to acknowledge their issue, and show them how you’ll solve it with a great solution. And for that, you’ll need to send them a proposal.

Yes, proposals take more time and effort to produce. You have to know your clients, understand their problems, and come up with ways to help them. But proposals also make it easier to make a sale, because instead of just giving them a product or service you’re actually solving their problem.

Whether it’s quotes or proposals that make sense for your business, drafting and sending them can still be time consuming — even with the help of templates.

Fortunately, automated quote and proposal software can help you prepare and submit them much quicker, which frees up your time for more productive tasks. It can also reduce turnaround times and the need to train new team members, and give your business an air of professionalism.

5 reasons to use software that automatically generates quotes and proposals

1. Producing quotes and proposals manually is a huge time sink

Your team members’ time is worth too much for them to be creating these documents—especially quotes. After all, other than the quantities, prices and addressee every quote is pretty much the same, isn’t it? Wouldn’t they be better off spending the time reaching out to prospects, checking in with past and current clients, or delivering extra value?

Automation allows more time for high-touch, creative and innovative activities, which all require a human touch.

2.  It signals your business as being capable and quick to act

Automating your quotes and proposals means you can get it to the prospect sooner. And that shows not only competency, but also that you respect their time. Nobody likes to be kept waiting.

Within minutes your prospect can be reading your professionally laid out document full of comprehensive information without any errors or unclear/undefined elements. Add a good call to action, and it will be a no-brainer for the client to accept.

Quotes and proposals help you and your client understand each other, and formally document:

They also put the ball in the client's court. Once they have your quote or proposal, they need to make a decision. And so the faster you can give them one, the less time they have to investigate alternatives or reconsider.

Of course, they can still look into competitors after they get your quote. But they won't be doing it beforehand. And if it meets their expectations (i.e. you can solve their problem for a price they’re happy with), they can accept it without spending any more time looking around.

4. It can help with branding

By using software to generate your quotes and proposals, you’ll be consistent with both your presentation and pricing strategy.

Some clients will come from word-of-mouth, and so quoting different prices to different prospects for similar services could raise a few eyebrows. People may think you don't have any pricing strategy and just make it up as you go along, which makes you look unprofessional.

Giving your document a consistent look is also important. Your logo, colour palate, website design, stationery design and vehicle signage all influence people at a subconscious level. It increases trust, and boosts your reputation in the eyes of your prospects. And your branding should flow through to your quotes and proposals to ensure they look clean, crisp and are an integral part of your business.

5. You won't spend as much time training new staff

With automation software you’ll spend less time training new team members, as most of the document is produced automatically. All you’ll need to teach them is how to use the app to make any necessary adjustments or additions for special cases.

As you can, there are many advantages to using software that can automatically generate quotes and proposals for clients. So why isn’t every business using it?

Some business owners think the software will limit their ability to make modifications because everything is generated automatically. Of course, some people might say, "Well that's the price of eliminating mistakes and getting it presentable and consistent". But the software will often take this concern into account by letting you add a ‘miscellaneous’ field to the template where you can make amendments or comments. Some templates even include one by default.

Another concern is how the software will get the information it needs to generate the quotes and proposals. Fortunately, nearly all of the software packages will integrate with at least one CRM. And for those that don't integrate directly, the third-party app Zapier can probably link them together.

Here are just some of the software packages that can either generate quotes and proposals automatically or at least make the process far faster for you:

Proposable lets you query clients and respond to their questions with inline comments—useful for high-touch businesses or those dealing with detailed and specific services.

There are plenty of reasons to automate your quotes and proposals. The time you could save (and reinvest in wiser, more productive avenues) is just one aspect that makes it worth considering. Add to that the boosted reputation and sales figures (thanks to the quick turnarounds), and automation quickly becomes an option you can’t afford to ignore.

Stay connected with news and updates!

Join our mailing list to receive the latest news and updates from our team.Don't worry, your information will not be shared.

You can join for free and unsubscribe at any time.